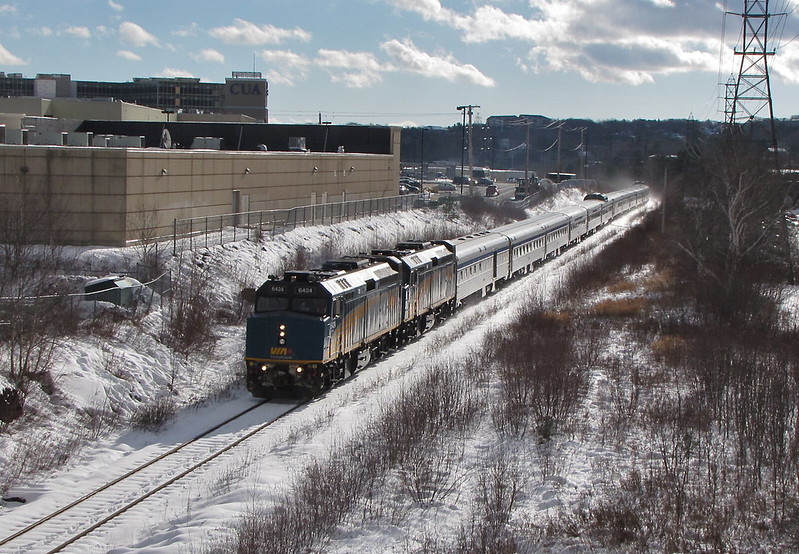 VIA Rail Train 15, The Ocean, departs Halifax with a stainless steel HEP consist in tow at the end of the 2015-16 Christmas season. (Photo – Tim Hayman)

It might seem a bit early to be thinking about holiday travels, but the Christmas season is just over two months away, and VIA has added additional departures of the Ocean into their reservations system to give people in the Maritimes more travel options during that busy time. In keeping with what VIA has done in each of the last two years, there will be three additional round trips added into the schedule, along with a rescheduling of the Sunday departures that would have left on Christmas day.

Also good news for railfans and those in the travelling public who prefer the older Budd-built stainless steel “HEP” equipment, a full set of HEP cars will be added in to supplement the normal two Renaissance trainsets, facilitating the additional departures. Unlike last year, where equipment cycling meant that the HEP equipment only operated on two round trips, this year three trips each way will be HEP equipped.

The return of this equipment means that additional accommodation types will be available on those trains, including “Cabin for 1” (traditionally known as roomettes), upper and lower berths, and drawing rooms that can be booked for 3 travellers (“Cabin for 3”). If past years are to be the example, there will also be a full diner with more meal components cooked on board, and a Skyline car to provide take-out food service and a lounge and scenic dome for coach passengers.

VIA has not yet made an official announcement about the extra trains, and it remains to be seen what their advertising campaign will look like this year. However, the extra trains are now in the online reservations system for booking, so we can see what additional dates and accommodations are available. UPDATE OCT. 20 – VIA has now made a formal announcement about the extra trains. See the press release HERE. The VIA release does not identify the equipment used, so see our breakdown below for those details.

Here is the breakdown of the Ocean’s schedule over the holiday period. Extra trains added into the system are shown in bold. Note that the Dec. 26 departures in both directions are rescheduled from Dec. 25, and as such are not truly “extra” trains, despite running on a Monday (*Note: the VIA release identifies the westbound trip on the 26th as an extra and the one on the 27th as rescheduled from the 25th). Equipment types for each trip are shown in brackets.

VIA 15 (Halifax to Montreal)

VIA 14 (Montreal to Halifax)

VIA has been somewhat disappointed in the ridership on the extra Christmas trains over the last two years. Though numbers were up slightly last year, they did not reach the levels that management had hoped for. In any case, the extra departures did allow for more people to travel than would have been possible on the normal 3/week schedule, and VIA has presumably decided that it’s worth running these additional trains this year.

Right now it’s important to spread the word, and make sure people know these extra options are there when they think about their holiday travel plans. Just as we said last year: if we want to encourage VIA to continue running extra trains during the holidays and consider adding additional frequencies at other times of the year, it would be best if these trains are well used!