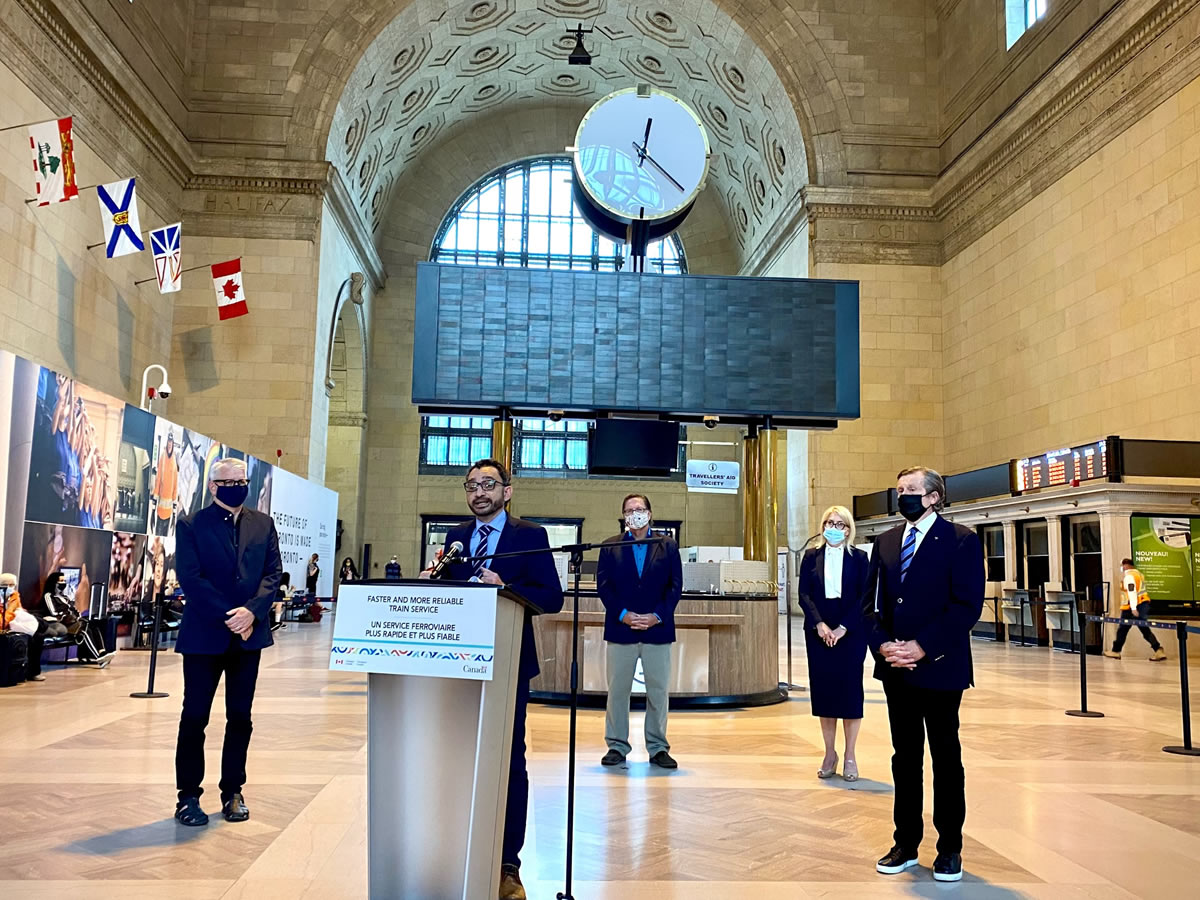 Canada’s Minister of Transport, the Hon. Omar Alghabra, announced the government’s long-awaited decision on VIA Rail’s High Frequency Rail (HFR) proposal at the Gare du Palais in Quebec City on July 6. This was the first in a series of events over three days in Trois-Rivières, Montreal, Ottawa, Peterborough and Toronto, confirming the government’s intention to start procurement in fall 2021 and confirming some, but by no means all, details of the project’s design.

In his remarks, Minister Alghabra also said that all Canadians deserve good rail service, which we hope bodes well for future investment in VIA Rail services beyond the corridor. Transport Action president Terence Johnson attended the Toronto event, and thanked Minister Alghabra for the government’s decision to invest in VIA Rail.

Minister Omar Alghabra’s journey from Toronto to Quebec City ahead of the announcement took more than 11 hours, including being held up by a freight train. The resulting average speed of less than 70 km/h is embarrassing for any modern country. Completing the High Frequency Rail project would cut that journey time by many hours and ensure dependable on-time arrival by significantly reducing contention with freight.

With confirmation that the government intends to build the entire HFR route proposed by VIA Rail, a cloud of uncertainty has now been lifted from the Montreal to Quebec City portion of the project. This had looked increasingly doubtful following the annexation of the Mount Royal Tunnel by the REM project, which will greatly complicate the routing into Montreal, raising fears that the Quebec portion of the line might be cancelled or left for a future phase.

Two highlights of Minister Omar Alghabra’s announcements were that the top speed for HFR had been raised to 200 km/h and that at least 90% of the route would be electrified. These details are good news both for future passengers and for the environment.

Subsequent clarifications have identified sections of track shared with freight approaching city centres, including through Montreal, as the obstacle to 100% electrification. Transport Action has suggested to both VIA Rail and Transport Canada that it may be possible to negotiate full electrification, because the freight railways face increasing activist shareholder pressure to demonstrate their environmental and social responsibility.

Upgrading to 200 km/h is possible within existing rights of way for the most part. If Transport Canada follows U.S. Federal Railroad Administration practices for Class 7 track standards, some additional crossing protection or replacement with bridges would be required where trains are going to run faster than 177 km/h. European railways have also started using radar and automated image recognition to detect grade crossing incursions and thus increase crossing safety on higher-speed lines.

The Siemens Venture trains shortly to be delivered for VIA Rail’s modernised corridor fleet are also already designed to operate at 200 km/h. VIA Rail has a contract option to purchase further trains for HFR, with electric or dual-mode locomotives being available.

The reinstated section of track between Havelock and Glen Tay would not be upgradable to 200 km/h using the sinuous dormant CP alignment, even though an average speed of 125 km/h could be achieved over that segment with adequate superelevation. However, the government’s announcement also indicated that the HFR project would be subject to a federal Impact Assessment. This is not technically required unless significant new track construction away from existing infrastructure corridors is envisaged, and qualifying existing corridors include railways, highways, power lines and pipelines. While the decision to use this process could simply be to minimize the risk of a dispute arising during construction, it may also indicate a more ambitious realignment is now being considered to increase speeds between Toronto and Ottawa and address feedback received from communities on that portion of the route.

The original vision of the HFR project followed Benjamin Franklin’s axiom “Well done is better than well said” with a view to rapidly reinstating respectably reliable and frequent passenger rail in the corridor rather than repeating the failures of EcoTrain, VIA Fast, and other shelved HSR proposals. The build was intended to take about four years and to have been up and running by now had the government acted decisively in 2016.

The suggestion that the project might not now be completed until around 2030 is therefore deeply concerning. We no longer have the luxury of time when it comes to addressing climate change; and a shift to rail and to a fast and emissions-free Canadian transportation network is one of the least difficult steps on the track to a net-zero economy before 2050. The government’s failure to act sooner, so that the planning for the REM, GO Expansion, and the Quebec Tramway project could all be fully integrated with HFR, is also the root cause of the costly challenges that the engineering team will now face in Montreal.

Key questions remain unanswered, and $75 million of publicly funded work product from the Joint Project Office remains unpublished. This work, known to have been in the government’s hands since December, should contain the answers and engineering solutions to vital questions that Transport Action has repeatedly requested clarification of, like the route that HFR trains will use to reach Toronto Union Station and how the project will untangle the fine mess created by the Mount Royal Tunnel having been annexed by the REM. It is vital that the general public and the railway industry see these answers, and soon. These should also help to firm up the cost estimate, now quoted as ranging from $6bn to $12bn.

Accompanying the week’s announcements, Transport Canada published a new conceptual map that differs significantly from the one used by VIA Rail for the past six years.

This map indicates that the Laval station would be at the Gare de la Concorde, connecting with the Montreal Metro, plus a station near Jean Lesage International Airport which would also connect well with local transit to Sainte-Foy and Levis. However, the Eglinton station in Toronto which appears on VIA Rail’s map, and which would be a hub with Crosstown LRT and the Ontario Line, is no longer shown. Hopefully, this turns out to be a matter of map scale rather than a loss of integrated transit connectivity.

An even larger surprise is that the map shows the use of Canadian Pacific’s Winchester Subdivision between Smith Falls and Montreal. Given the original intention of avoiding freight corridors, and the decision to electrify as much of the HFR system as possible, increasing the amount of shared or parallel trackage would be a major change in strategy. The resulting option to bypass Ottawa and run direct Montreal-Toronto services might provide a useful time saving at the beginning and end of the business day, maybe even restoring the 3:59 timing that used to be provided along the Kingston route, but that could be at the expense of service frequency to Ottawa. Meanwhile, if Ottawa is treated as a through station with reasonably short dwell times, the difference in running time may not be large enough to justify the additional expense. This new map thus raises more questions than it answers, and it is worrying for such a big change to be sprung at this stage.

The government’s announcement stated the intention of starting procurement in the fall of 2021, following further consultations with cities along the route, Indigenous communities, and industry over the rest of the summer. We are hopeful that many of the questions above will be answered in this consultation process and made publicly available.

The timeline to start procurement is almost certain to be interrupted by a federal election, although with the cross-party support the project has received, it is unlikely to be completely shelved under the next government.

VIA Rail has also launched a recruitment process for the role of Vice President, High Frequency Rail, and the recruitment of a professional engineer with decades of rail experience to lead the project will be a clear sign of progress. The job description states: “The program will take place in several phases. The first confirmed phase is the investment of $491M announced by the government in April 2021.”

The Impact Assessment and procurement processes are likely to take at least a year, putting the construction start date back to 2022 or 2023, although VIA Rail is now able the negotiate and collaborate with Metrolinx, Exo, CN and CP with more certainty that the project will proceed, and may be able to commence some enabling works using the first tranches of the $491.2 million over six years committed in Budget 2021.

We will continue to advise the government to take care in its selection of a procurement model, Ottawa’s Confederation Line being a cautionary tale.

We also urge the federal government to unequivocally endorse VIA Rail’s vision of the new HFR line as part of a greater network that would allow trains on the existing routes through Kingston and Drummondville to make more stops at intermediate stations like Port Hope, Coburg, Belleville, Cornwall, and Saint-Hyacinthe, improving service for these communities too.