Lessons must be learned from Christmas travel woes 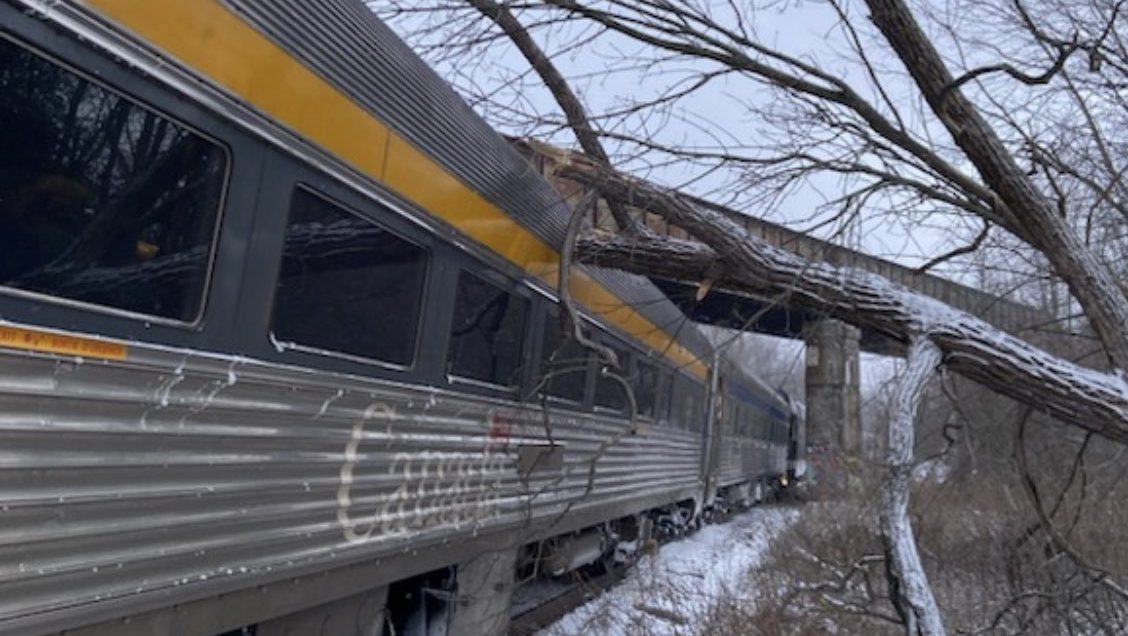 Winter happens in Canada, and we cope. Storm Elliot felt like getting all of winter all at once for much of the country. Thousands of motorists we stranded on highways and local roads, spending uncomfortable nights in their vehicles. However, the story that made headlines was VIA Rail services between Toronto and Ottawa being severely disrupted by the storm, with passengers enduring delays of up to 21 hours.

Chaos in the Corridor

This is somewhat unusual for rail, which is far more weather resistant that air or road travel, but snow, ice and power outages began to impact CN’s Kingston subdivision on Dec 23rd, causing issues with signals, switches and crossings so that trains had slowed to a crawl by that afternoon. The storm brought down trees that train #55 then struck, that train and several following trains were immobilised. While other trains were able to stop at stations, there was no good way to get a crew out to clean up the branches and release train #55 given the whiteout conditions on the roads.

All the trains stopped in the corridor had fuel, and power for heat and light remained on, making waiting out the worst of the weather on board by far the wisest course of action. However, in the absence of a clearly communicated plan to address the situation, some passengers on train #55 became agitated as the night wore on. A few people tried to leave the train, potentially putting themselves in serious danger. Cobourg police and paramedics were finally able reach the train to de-escalate the situation and bring supplies at around 09.30 the following morning, and a relief train was able to reach the site and take passengers off later in the morning.

The communications around this incident, both to passengers on the trains and to friends and relatives waiting to meet them at stations, left much to be desired. With nine stopped trains and seven cancellations to deal with, it appears that VIA’s operations and customer service teams were stretched well beyond their capacity, and many on board staff had been on duty continuously for well over 24 hours by the time everything was resolved.

The following day, shortly after the relief train carrying passengers from #55 had made it through, a CN freight train derailed at Grafton, near Coburg, blocking the corridor, and causing all Toronto-Ottawa and Toronto-Montreal trains to be suspended for several days.

VIA Rail’s President and CEO, Martin Landry, subsequently offered an apology for this situation and a promise of a thorough investigation to learn the lessons and improve procedures. Transport Action suspects that Canada’s long-term underfunding of the passenger railway, including shortages of equipment and the government requiring VIA to lay off experienced employees during the pandemic, will have contributed turning a difficult situation into an embarrassing one.

Ordeal on the Ocean

Attracting less media coverage but resulting in an even longer delay, passengers travelling home to the Maritimes for the holidays on board VIA train #14, scheduled to depart Montreal at 19.00 on December 23 were surprised to find their train returning to the station shortly after departure. Passengers were told that a section of the line ahead, between Mont Joli and Campbellton, was impassible due to the storm.

After discussions between VIA operations and Canadian National, a decision was made to delay departure until 06.00 the following morning, with assurances from CN that this would provide sufficient time for the line to be cleared and re-opened for the train to pass.

The next morning, the train proceeded as far as Rivière-du-Loup, whereupon, after a further wait, passengers were informed that contrary to their initial assurances, CN would not now have the line cleared in time. Repair crews had reportedly ended their shift and wouldn’t return until sometime on the following day. With no other option, short of an overnight layover in Rivière-du-Loup, train #14 was then sent back to Montreal, arriving in the early hours of the morning on Christmas Day, exactly where it had started 30 hours after its initial departure.

Passengers on the westbound train #15 from Halifax fared little better. Their train was left stranded for just as many hours at Campbellton, before being sent back to Halifax.

With little confidence in CN being able to open the line within their next promised window, Transport Action Atlantic’s President Tim Hayman, who was a passenger on train #14, was fortunate enough to find a seat flight home late on Christmas Day, but many passengers simply saw their plans to visit family for the holidays forfeited entirely, and were in some cases also stuck in Montreal over Christmas due to the train cancellations in the Corridor.

Neglect in the North

Decades of underfunding and having to rely of obsolete equipment caused problems for the Keetwatin Railway, putting two of its three VIA passenger cars out of service, so the last train before Christmas to Pukatawagan from The Pas had room for only 40 passengers. The Mathias Colomb First Nation stepped up and was able to fly the remaining passengers home for Christmas on its airline, Missinippi Airways.

Although Canada has promised funding to replace this equipment – the last remaining examples of the VIA “Blue and Yellow” fleet, originally built for CN in 1954, still on the roster and maintained by VIA but leased to Keewatin Railway – the details of this promise remain mysterious. There is very little second-hand equipment available that might be suitable, and the lead time to deliver brand new trains is considerable.

As host railway, Canadian National received a share of the criticism for the week’s chaos. It is not clear whether a second team could have been dispatched to finish clearing the debris on the Mont Joli subdivision, or why VIA was not warned sooner that the work was unlikely to be completed on schedule. Nor it is clear why locomotives from Oshawa or Belleville yards, that could be deployed in the event of a problem in the corridor, were not mobilized. Systems in the corridor began failing under winter conditions they should have been designed and engineered to tolerate.

However, CN’s 30-car derailment at Grafton was cleared relatively quickly, with VIA services able to operate in pairs on December 27 and services largely restored to normal the following day. CN also came through for VIA in western Canada when the eastbound Canadian suffered a partial loss of power, with CN providing an extra locomotive to lead the train from Edmonton to Winnipeg.

What is clear, from both VIA’s troubles, including east coast passengers having to abandon travel plans entirely or make their own alternative travel arrangements, and from the debacle with air passengers being stranded in Mexico, or facing cancelled vacations after Sunwing abruptly suspended all services from Regina and Saskatoon, is that the current framework for passenger rights in Canada is woefully inadequate.

Canada’s passenger rights regulations need to be reworked to cover all modes – air, rail, and bus – and to provide for journey continuance when making connecting journeys that use multiple modes.

The airlines successfully lobbied for loopholes in Canada’s Air Passenger Protection Regulations that are not present in the European legislation it was modelled on. For example, the airlines contend that cancelling a flight because they are understaffed can be classified as a “safety issue” exempt from compensation, rather than managerial incompetence. The surge in late-running long-distance trains caused by CN’s shift to the misnamed philosophy of “Precision Scheduled Railroading” forced VIA Rail to abandon compensation for delays on long distance routes in 2015, replacing them with a disclaimer. Common standards in the motorcoach market will be vital to restore confidence in motorcoach travel using the post-Greyhound mosaic of operators, and to prevent undercutting on price by compromising dependability.

There are examples of good customer service – VIA agents have discretion to rebook passengers made late by air travel delays into Pearson or Dorval, and Maritime Bus does its best to help out passengers whose connecting VIA train was delayed – but these are not formal arrangements that travelers can depend upon. Canadians deserve better.