Welcome Aboard The New Fleet 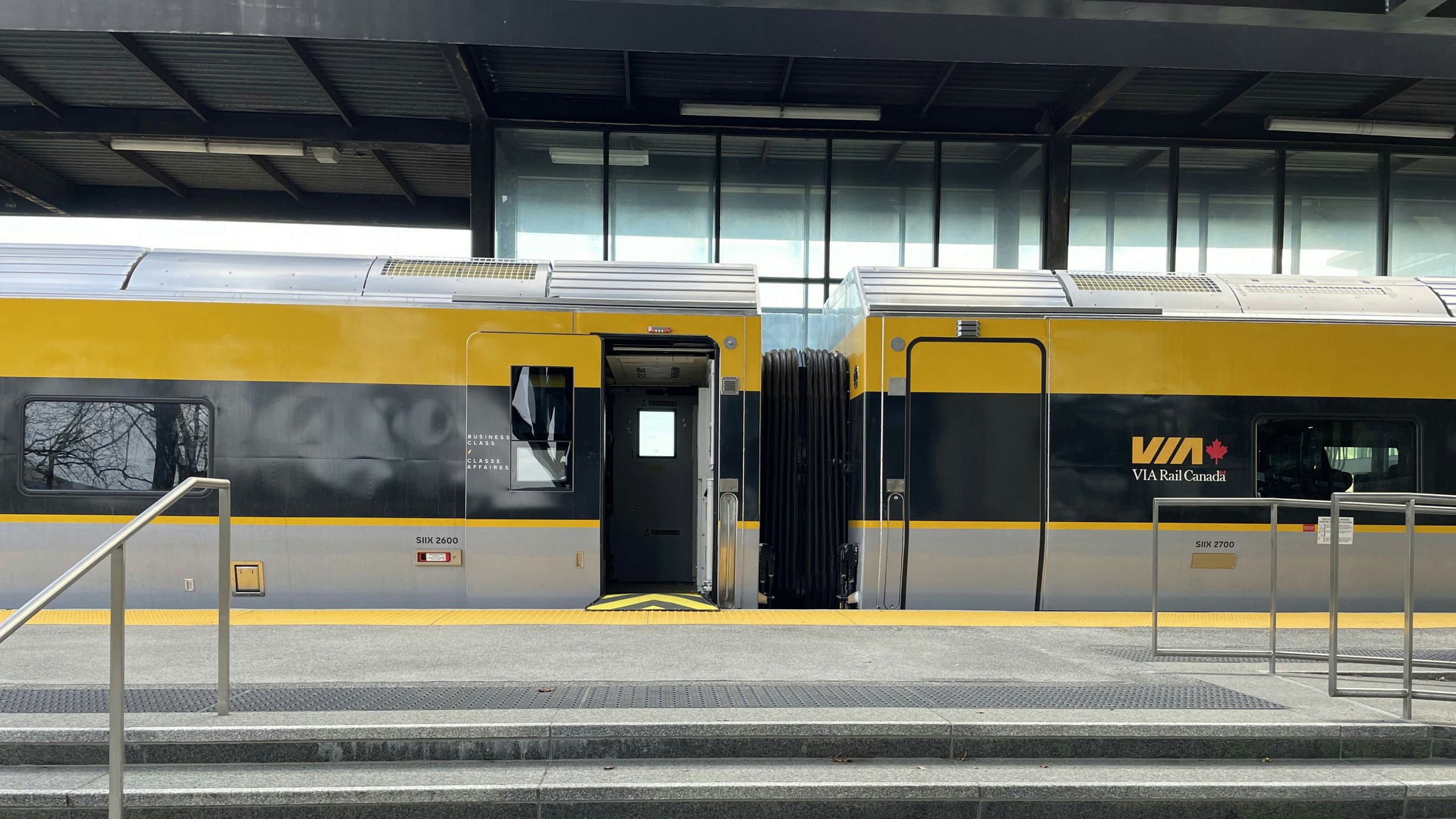 On November 30, 2021, VIA Rail formally unveiled the first train in its new corridor fleet to assembled media, politicians, advocates, and fans in Ottawa. This is the culmination many years of work by VIA Rail, who were given permission by the government to start procurement for a new corridor fleet in 2017, and by Siemens Mobility who were awarded the contract in 2018.

The unveiling of the new trains also marks the fruition of more than a decade of advocacy by Transport Action and it regional affiliates, calling for a suitable replacement for the LRC fleet. The LRCs were introduced in the summer of 1981, and are now a decade past their originally anticipated service life. We would particularly like to thank former Minister of Transport Marc Garneau for heeding the advice that new equipment was going to be needed urgently to sustain VIA Rail’s corridor services. The new trains will begin to enter service in late 2022 and should secure the future of inter city passenger service in the corridor for a generation.

As part of the event, invited guests, including Transport Action president Terry Johnson and past presidents David Jeanes and Harry Gow, were able to tour the Siemens “Venture” trains for the first time, visiting the locomotive cab and one of the economy class cars. Because the first train is currently configured for testing, which will start in December between Ottawa and Coteau, not all of the cars were opened for viewing on this occasion and a few items such as the luggage towers are yet to be installed. That did not detract from the sleek vision of future corridors services drawn up alongside the new high-level platform at Ottawa station.

During the press conference, the question was asked whether acquiring new diesel trains really contributes to progress toward the government’s goal of achieving net-zero carbon emissions by 2050. The answer given is that yes, these new trains are significantly more efficient than their predecessors, with lower emissions both of CO2 and other pollutants.

More significantly, by providing more seats, greater comfort, higher reliability, and hopefully more frequent services even in advance of the High Frequency Rail (HFR) project, they will contribute to modal shift from road and air travel between cities along the Quebec-Windsor corridor, reducing emissions per passenger journey by up to 90%.

“In the face of the climate crisis and an unprecedented demand for more sustainable mobility, the relevance of passenger rail is stronger than ever. This new fleet and the High Frequency Rail project will further that interconnectivity as our passengers will be able to travel more often and more quickly to more destinations.”

Francoise Bertrand, Chairperson of the Board, VIA Rail

It has also been previously announced that the HFR corridor will be electrified where it does not share tracks with freight, and an electric or dual-mode version of the Siemens Venture trains is available and likely to be used on those services.

The cab cars are one of the most important features of these new trains, allowing full bidirectional operation and saving hours that are currently spent every day turning trains on wye tracks throughout the corridor after each trip. The limited number of existing train consists that VIA has been able to deploy in bidirectional configurations have been very helpful in allowing VIA to support existing corridor service frequencies with a reduced number of available LRC and HEP1 cars, and so having all 32 trains in the new fleet able to operate bidirectionally will create scope for additional service frequencies to meet the growth of demand for rail travel in the corridor.

Although the Siemens “Viaggio” trains produced for Austria’s OeBB “RailJet” high performance intercity service (upon which the “Venture” design is based) also have cab cars, the ones produced for VIA Rail required considerable new engineering to North American railway standards. The cab car nose is matched to the SC42 locomotive, and the paint scheme on the cab car also echoes the design of the locomotive, giving the entire train an integrated and unified look.

The driving position in the cab car is accessed through a secure door from the passenger compartment and does not have separate crew doors. This is similar to the Austrian design, only on those trains the cab car is used for the premium business class cabin rather than economy seating. Over the past year, the remaining grade crossings in the corridor where the crew previously had to climb down and use a lineside push-button have been upgraded, so the lack of crew doors shouldn’t cause any operational issues.

The SC42 variant of the Siemens “Charger” locomotive produced for VIA Rail has much in common with the SC44s produced for US corridor services, and the ALC-42 variant which is now being produced for long distance Amtrak services, although with a unique streamlined nose profile. This includes being capable of operation at 125 mph (200 km/h) should track conditions allow, although current plans do not include the significant work required to raise track speeds by that much. It is expected that operating speed on the current corridor will be 100 mph, a slight improvement over the 95 mph top speed of the F40 locomotives, and that combined with faster acceleration this will allow VIA Rail to shave several minutes off trip times.

The US variants of these locomotives are all being fitted with Positive Train Control equipment, the choice of system depending on which corridors they will be assigned to, and the VIA Rail locomotives can be easily fitted with this technology if such a system is selected for the HFR project, mandated by Transport Canada, or if desired to enable cross-border services in future.

Both the cab cars and the locomotives have easily replaceable nose sections in the event of minor damage, plus crash energy management zones to protect the crew and escape hatches built into in the cab roof that the crew can use in the event of a more serious accident, although hopefully this remains the least-used feature of the new trains.

Power operated wheelchair lifts that swing out from the vestibules of the cars will also remove the need for train crews to retrieve, operate and put away a manual lift at corridor stations, so boarding or alighting with a mobility aid will become a much faster and smoother process.

The seating in both economy and business class will have deeper cushions than the updated seating installed in the LRC fleet over the past decade, a welcome improvement. The airline-style overhead bins on the current corridor fleet are replaced by an overhead shelf for lighter bags, with a bit more clearance for taller passengers. There will be additional luggage space at the ends of the cars, including space for at least one bicycle per car.

The tables between seats in business class will include a segment between the seat backs that improves the separation between rows. The tray tables have also been redesigned, which should eliminate the issue experienced in the LRCs of the tray being too far forward due to the generous business class seat pitch. Windows blinds are provided, which appear to be semi-transparent to reduce glare at sunrise and sunset without completely blocking the view.

Every pair of seats will have a power socket between the seats, and in business class a second power socket between the seat backs in front will reduce the need for trailing cords. On the first train these were also equipped with dual USB-A ports for charging mobile electronics. With the mobile phone industry now rapidly switching to USB-C and “Qi” inductive charging, it is possible this feature may change by the time the bulk of the order is delivered and the trains take over all corridor services in 2024.

The business class cars will have one block of four seats surrounded by a full height partition, affording some privacy for groups conducting business meetings while travelling. The new booking system and online reservations system that VIA Rail is currently working on will feature seat selection, which will presumably allow this pod to be reserved, although at this stage it is not known whether there would be an extra fee for doing so.

Business class meals will continue to be served at seat, as is currently the case for corridor trains, with a snack cart service in economy class. The galleys in each car have been designed to be a significant upgrade from the facilities in the LRC and HEP2 business class cars, although the expected addition of an espresso machine for a wider variety of hot drinks was not yet in evidence on the test train.

The Siemens trains will be semi-permanently coupled, including the connection between the locomotive and the first business class car. This is a change from the Siemens equipment orders for Amtrak and state-supported corridors in the United States, and it is likely to improve ride quality by eliminating slack action.

The 32 trains in the new fleet will be arranged in consists of three, four, five and seven cars to enable longer or shorter trains to be used depending on demand, and all of the shorter formations could be lengthened by ordering additional cars in future if passenger demand resumes the rapid growth seen between 2014 and 2019.

Because the VIA Rail SC42s only have a standard coupler on the nose end it is likely that other locomotives, probably F40s, will be kept on standby in the corridor to assist in case of a failure. However, with the new trains also featuring extensive computer-aided diagnostics and telemetry that can detect issues and communicate with the maintenance centres automatically, allowing predictive and preventative maintenance, in-service failures are likely to be rare. VIA Rail is also currently working on projects to rebuild the Montreal Maintenance Centre and refit the Toronto Maintenance Centre to better support the new fleet.

One of the most important features of any new train for Canada is its ability to fight the snow and keep passengers comfortable and train systems functioning through extremes of temperature. To this end, both the cab cars and locomotives have integrated snow ploughs, and this is also the reason it has been crucial for Siemens to successfully deliver the first train on schedule, so that it can be thoroughly tested in winter conditions before acceptance into service and the start of squadron production in 2022. One of the Siemens passenger cars being built for Illinois was put through static tests at NRC’s winter testing facility last year, and the motorized step system to be used on the VIA version of the train was tested by mounting it under an existing baggage car last year, but there is no substitute for proving performance through the rigours of a true Canadian winter, so for once the railway will be hoping for at least a few good snow days to really put these new trains through their paces.