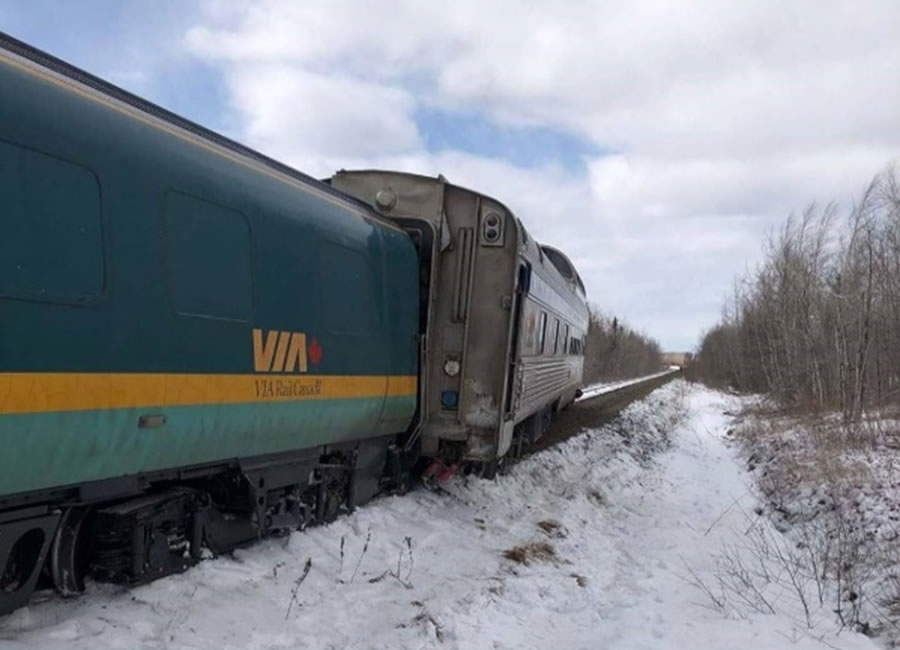 The consequences easily could have been much more serious for passengers and crew aboard VIA train 14 on the early afternoon of April 4, 2019.  The 14-car eastbound Ocean was proceeding towards Moncton at the permissible track speed of 60 miles per hour when the last two cars went on the ground because of a broken rail at mile 15.27 of CN’s Newcastle Subdivision. There were no serious injuries, but there was significant damage to track and equipment. The results of a Transportation Safety Board investigation into the incident were released on September 30.

The TSB found that a deteriorated length of rail at a public grade crossing, that had gone undetected when a hi-rail inspection vehicle had passed over it hours earlier, had collapsed under the weight of the train. Ultrasonic and track geometry inspections in the previous six months had also failed to identify the defect. The investigators found that the web (vertical portion) of the rail that fractured had thinned due to corrosion to a point where it could no longer support normal train forces, but had remained undetected because it was hidden by the crossing surface.

As the locomotives travelled over the crossing, the operating crew experienced rough track conditions. Seconds later, they received a radio call from the service manager, who was located in the fourth car, reporting that there had been a hard impact. But it wasn’t until the train unexpectedly slowed after crossing the bridge at mile 14.9 that they realized the last two cars had derailed and immediately made an emergency brake application. Fortunately the derailed cars remined upright throughout, and the five passengers and one crew member in the Park-series dome car did not suffer any serious injury. The VIA employee, however, had become separated from his radio, and was unable to immediately contact the head end. The other derailed car was an unoccupied Renaissance “transition car.”

Early in its investigation, the TSB issued this Rail Safety Advisory regarding effective and consistent rail condition monitoring practices at railway crossings:

“Given the challenges with detecting rail defects at railway crossings, Transport Canada may wish to review how rail condition monitoring is performed at railway crossings and provide guidance (as necessary) to ensure that these inspections are conducted in an effective and consistent manner.”

The full TSB report can be found here: