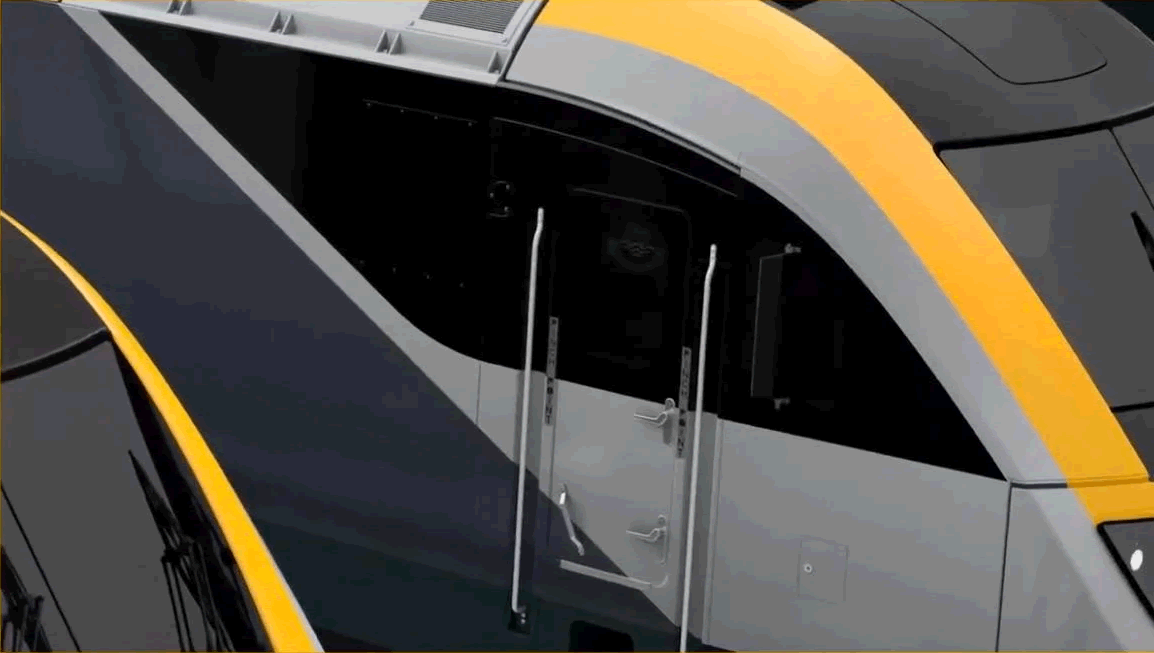 Siemens is close to delivering the first of the new VIA Rail corridor trains, ordered in December 2018, for testing, starting in late summer. A second train will follow later in the year, and testing of both new trains will take place primarily on VIA-owned track between Ottawa and Coteau. The work will continue through winter 2021, giving the Canadian weather an opportunity to do its worst and the technical teams the opportunity to find solutions to any issues that arise.

Although two locomotives configured for VIA Rail have been observed outside the Siemens plant waiting for their turn in the paint shop to receive their new livery, many details of the design and technical differences between the VIA Rail order and previous Charger and Venture orders remain under wraps pending the official unveiling of the first train.

VIA Rail released a short “teaser” video in social media on March 31st. The very short computer-animated sequence in this video, combined with shots one of the completed locomotives suggest that there have been refinements to the design and paint scheme since the original announcement.

The Siemens Venture car design is a North American derivative of the Viaggio Comfort cars created for Austria’s “RailJet” high performance rail service, first ordered in 2006 and launched in 2008. The RailJet coaches and cab cars, coupled with Siemens EuroSprinter locomotives, have allowed Austria’s OeBB to approach the performance of high speed rail without building costly new lines, a model that Transport Action has long advocated as the best way to rapidly modernize Canada’s passenger rail network.

The Siemens Charger diesel locomotive order for the new fleet has many internal similarities with the diesel version of the Vectron locomotives offered in Europe, but uses the Cummins QSK95 prime mover, providing 4,400 hp, rather than the 3,200 hp MTU power plant used in Europe, and a single cab rather than two. The Charger also benefits from the experience gained from the electric ACS-64 locomotives built for Amtrak, which were based on the EuroSprinter design.

The first order for Chargers was placed in March 2014, with a joint purchase of 32 SC-44 locomotives by Illinois, California, Michigan, Missouri and Washington to re-equip state-supported corridor services operated by Amtrak. This was followed in September 2014 by an order for the All Aboard Florida “Brightline” project between Miami, Fort Lauderdale and West Palm Beach, with an initial order of five trains with two 4,000 hp locomotives and four Venture coaches each, which were delivered in 2017. The Siemens trains are capable of operation at up to 125 mph (200 km/h) and this maximum speed will be reached once the Brightline extension to Orlando is completed in 2022.

Siemens was then selected to replace Nippon Sharyo as the subcontractor for the Next Generation Corridor Equipment joint procurement, lead by California, Michigan, Missouri and Illinois in November 2017, resulting in orders for a further 137 single-level Venture cars to replace the unsuccessful bilevel design initially selected. The Caltrans order includes cab cars, which will also be a feature of the new VIA Rail fleet.

Several other orders have followed, including a long-distance version of the Charger to replace the General Electric P42s as the core of Amtrak’s long-distance fleet. This ALD-42 variant features a larger fuel tank, a rounded bolted nose, and de-rating of the primer mover to 4,200 hp to lengthen maintenance cycles.

By selecting equipment that was already proven in North America and that will continue to have commonality with large pool of equipment used across the continent, VIA Rail hopes to ensure long-term maintainability and timely introduction into service of the much-needed new fleet. The cab cars being built for both VIA Rail and Caltrans are the only novel element in the fleet design, because North American requirements for these are significantly different from European standards.

One of the Venture cars from the Illinois order was sent for cold-weather testing at NRC’s facility in Ottawa last year, and the low-platform step mechanism for the new cars has been tested in Canadian conditions by being mounted on a stainless-steel baggage car that has run on corridor services throughout winter 2020.

VIA Rail have ordered a total of 32 trains, including cab cars to allow the new trains to operate bidirectionally. This will result in considerable time and costs savings compared to the current need to turn most trains on a wye track at the end of their trips.

Like the Brightline fleet, the new VIA trains have a designed operating speed of up to 125 mph and have been tested at up to 140 mph. Unfortunately, that top speed can’t be reached anywhere in the Quebec-Windsor corridor today, although the High Frequency rail project envisages 110 mph operation. Upgrading stretches of track for safe running at 125 mph would require the closure or grade separation of road crossings but does not necessarily require passenger-dedicated “high speed rail” track.

One thing we do know for sure is that the noses of the VIA Rail variant of the Siemens Charger and matching cab cars will receive a streamlined nose, unlike the snub-nosed SC-44 state-sponsored corridor units. The design is more streamlined than the Amtrak Long Distance units, while using the same bolted mounting to permit swift replacement if necessary. The new locomotives will also be ready for future installation of Positive Train Control equipment, which is now mandatory in the United States and standard for Amtrak. The Canadian government has yet to mandate this safety feature.

The trains will be semi-permanently coupled, with wide gangways between the cars that are fully sealed against the weather. A standard coupler on the cab car should allow two trains to run together, following current practice for Toronto-Ottawa/Montreal trains.

Inside, there will be significant differences from the Venture cars delivered for Amtrak Midwest and California services. A British design firm has been engaged to develop a Canadian configuration that will suit VIA Rail’s passenger service objectives, and this will be revealed when the first test set arrives in late summer.

The VIA fleet will have four variants of the car layout: A business class car with 2+1 seating and two accessible spaces, which will have standard coupler at one end to connect to the locomotive; an intermediate business class car; an economy class car; and an economy car with additional galley space. Both types of economy car will offer accessible spaces and washrooms. The cab cars will also have a galley space, but do not feature a space for checked baggage or packages, and the cab can only be accessed through the coach, which may result in operational constraints at stations where the train crew must operate grade crossings. To accommodate the demands of different routes in the corridor, these cars will be formed into trains ranging from three cars to seven.

While the Siemens car shell design allows a double vestibule configuration, a single vestibule design has been selected, with the space at the non-vestibule end of the car being used for additional luggage towers. The trains will also be equipped with digital passenger information displays, security cameras that relay data to the operations center in real time, and European espresso machines.

We can also expect the new trains to be considerably quieter than the previous generation of locomotives, which is mostly good news for lineside communities. The Charger locomotives are so much quieter than before that San Diego’s North County Transit District has launched a safety campaign to educate residents and deter trespassing.

Once winter testing of the two pathfinder trains is complete, VIA Rail will give Siemens Mobility the go-ahead to begin squadron production, with eight more trains to expected to be delivered by the end of 2022 and the remainder of the fleet by early 2024.

When the two Siemens trains enter revenue service, by the middle of 2022, the two remaining Renaissance sets operating in the corridor will almost certainly be the first of the existing equipment to be withdrawn and replaced. While the first trains will be based at Montreal Maintenance Centre, the routes they operate on will depend on fleet rotation and schedule planning at the time.

Of the existing corridor fleet, the oldest equipment may remain in service the longest. Both the rebuilt F40PH-2D locomotives and the HEP2 stainless steel passenger coaches, which are being given an overhaul and interior update, are likely to be redeployed to supplement VIA Rail’s long distance and remote service fleet. Although seven decades of service are taking their toll on the vintage stainless-steel cars, the government has not yet heeded calls to start work in a replacement long distance fleet.

The LRC coaches are all to be withdrawn once the new fleet is delivered in April 2024, being well beyond their original design life and able to continue in daily service only through the skill and dedication of VIA Rail’s maintenance staff. The LRC coaches will remain on standby for some time in case of any latent teething troubles, which are not unusual with any new train fleet, before being finally withdrawn.

Being an example of Canadian engineering leadership and forerunners of tilting train technology elsewhere in the world, it is hoped that a selection of LRC coaches will be preserved for display at Exporail in Montreal and by the VIA Historical Association, accompanying the two preserved LRC locomotives.

If the federal government and Canada Infrastructure Bank proceed with the High Frequency Rail (HFR) project or otherwise support a much-needed increase in VIA Rail services in the Quebec-Windsor corridor, the contract with Siemens has options for a further 22 additional trains.

One of the options under consideration for HFR is electrification, consistent with Canada’s goal of net zero CO2 emissions by 2050. The long-standing reluctance of Canada’s freight railways to countenance electrification of shared trackage may make this challenging, so it is likely that a dual-mode locomotive would be preferred for electrified HFR, allowing partial electrification or a rolling program of electrification, and flexibility in case of detours.

Amtrak recently selected Siemens as the preferred bidder for an order to replace equipment that operates both on the electrified Northeast Corridor and connecting routes including the Empire Corridor to upstate New York, Buffalo and Toronto. This order, once finalized, may involve a dual-mode variant of the Siemens Charger locomotive based on the Vectron Dual Mode locomotives offered by Siemens in Europe. The Siemens Vectron platform, which is available in diesel, electric and dual-mode variants, is the successor to the EuroSprinter cousins of Amtrak’s ACS-64 locomotives, and shares much of its design with the Siemens Charger. Such a dual-mode locomotive could be ideal for Via Rail’s High Frequency Rail project.