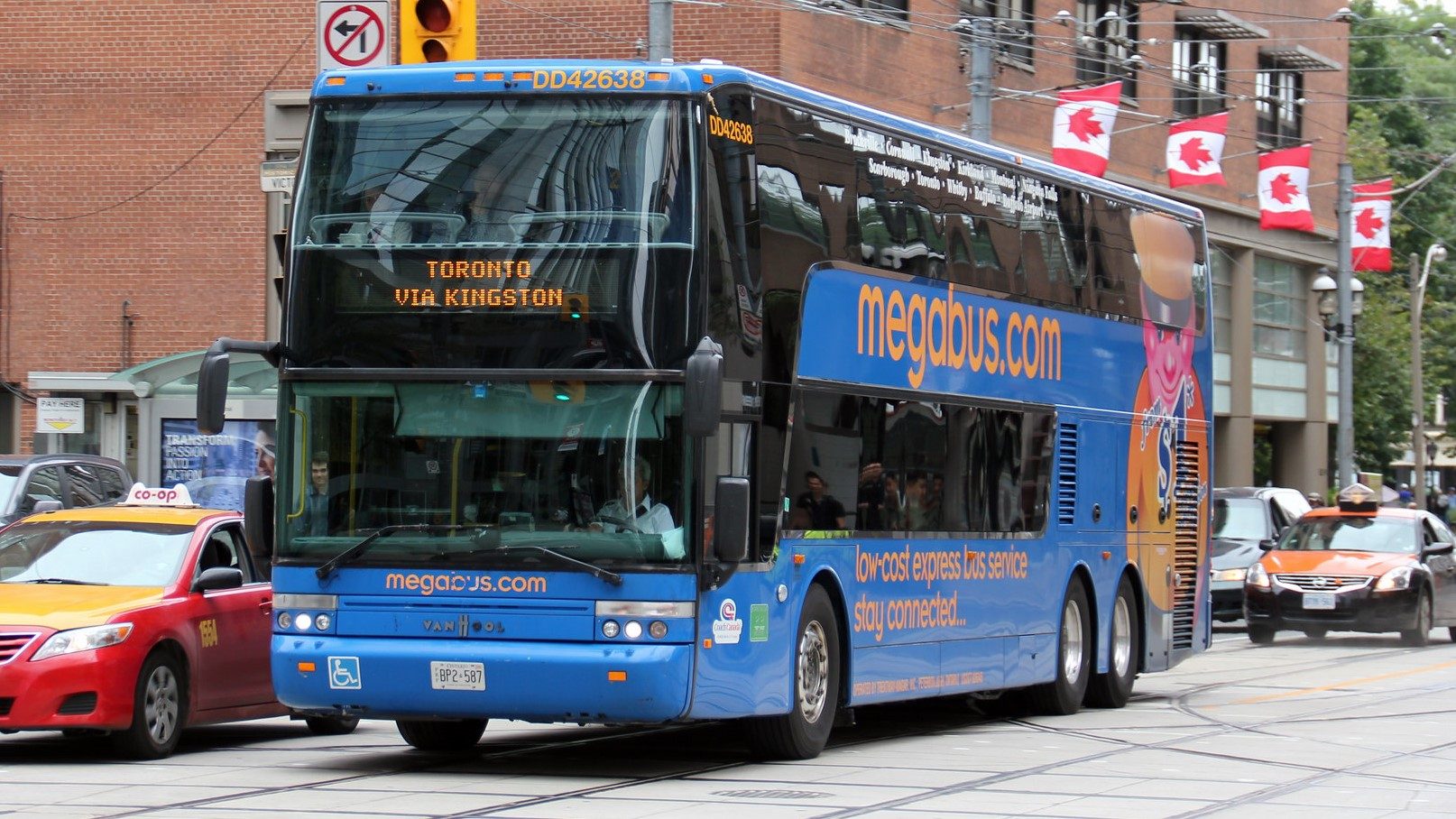 Following the cancellation of Greyhound Canada services and the deregulation of intercity motorcoach services in Ontario, two companies have begun serving the Toronto-Kingston-Ottawa route.

Note: The schedules and routes described below are subject to change, please check with the motorcoach operators for current routes, schedules are fares.

Megabus, which operated the Toronto-Kingston-Montreal route prior to deregulation, launched its express Toronto-Kingston-Ottawa service on May 20, 2021 the day after Greyhound announced that it was making the suspension of its remaining Canadian routes permanent. This service was fare-free for the first week, until deregulation formally came into effect in June 1st. Initially, this route runs twice daily in each direction except on Tuesdays and Wednesdays, although it is expected that the service will become daily and additional frequencies be added in the fall as travel demand increases.

In Toronto, the buses depart from the new Union Station Bus Terminal, calling at Scarborough Town Centre, the Kingston Bus Terminal at 1175 John Counter Blvd., and arriving in Ottawa at St-Laurent Station, where passengers can connect to the Confederation Line LRT and OC Transpo bus services. Megabus is using its blue double-decker Van Hool TD9 series buses, which seat up to 81 passengers. Advance booking by telephone is requested for passengers with wheelchairs.

Connections in Kingston would be possible with the existing Megabus lakeshore route, but connecting tickets can not currently be purchased online. While Megabus also operates a Kingston to Toronto Pearson service, which calls at Belleville, Trenton and Port Hope, this departs from Queens University instead of John Counter Blvd., so connections with that service are only possible by taking Kingston transit between the two.

Rider Express began operations between Toronto and Ottawa on June 28, 2021 with morning and evening services in both direction on Monday, Wednesday, Thursday, Friday and Sunday. The Ottawa stop is outside St. Laurent shopping centre, one stop from the Ottawa VIA Rail station on the Confederation Line LRT, the Kingston location is an Esso gar station on the corner of Sir John A MacDonald Blvd. and John Counter Blvd., with the bus arriving curbside in Toronto outside Union Station on Front Street. [Update – Oct 4, 2021: The stop location has now been moved inside Union Station Bus Terminal.]

The service is being operated with Prevost H3 series motorcoaches, and passengers with wheelchairs are asked to make reservations two days in advance.

Both Rider Express and Megabus have also applied to Transports Quebec for licenses to operate between the eastern Ontario border and Montreal, providing Ottawa-Montreal services. In the case of Rider Express, we understand this would be along the north shore of the Ottawa river, serving what was formerly Greyhound route 781. Meanwhile, Quebec-based Orleans Express has commenced a Gatineau-Ottawa-Montreal service running along Highway 417.

So far, no operator has announced an intention the former Greyhound routes through Peterborough and Perth, nor the other former Greyhound routes around Ottawa serving Cornwall or Renfrew County. However, Onex Bus has announced plans for a Toronto-Peterborough service in the near future. All three operators have also launched services between Toronto and destinations in southwestern Ontario. (see https://ontario.transportaction.ca/motorcoach-deregulation-sw-ontario/)

Transport Action Canada has written to Transports Quebec urging the ministry to expedite the licensing process for new entrants reinstating motorcoach routes in Eastern Ontario, subject to these services offering wheelchair accessible vehicles and interline connections in Montreal for passengers travelling onwards to other destinations throughout Quebec and the Maritimes.

Transport Action believes that it is important for motorcoach operators to enter into interline ticketing and package service agreements, increasing the range of destinations passengers can reliably reach; to select stops that provide safe places for passengers to wait for their bus; and to provide wheelchair accessible vehicles on all routes. We would also prefer to see motorcoach routes that complement passenger rail, bringing passengers to and from hubs and with interline ticketing, as is the case in the Maritimes, rather than attempting to compete head-to-head over the same routes.

Megabus is a brand operated by Coach Canada, a subsidiary of Coach USA. Coach USA was formerly owned by Stagecoach Group PLC and was sold to US private equity firm Variant Equity Advisors in 2019.

Rider Express, is a Canadian privately-owned company based in Saskatoon, which was launched in 2017 initially to serve routes in Saskatchewan lost after the abrupt abolition of the Saskatchewan Transportation Company, has since grown to provide motorcoach services across western Canada, extending services to Vancouver and Winnipeg. Rider Express and Ontario Northland are working to establish an interline agreement to allow passengers to travel between Rider Express services in Western Canada and its new southern Ontario destinations.