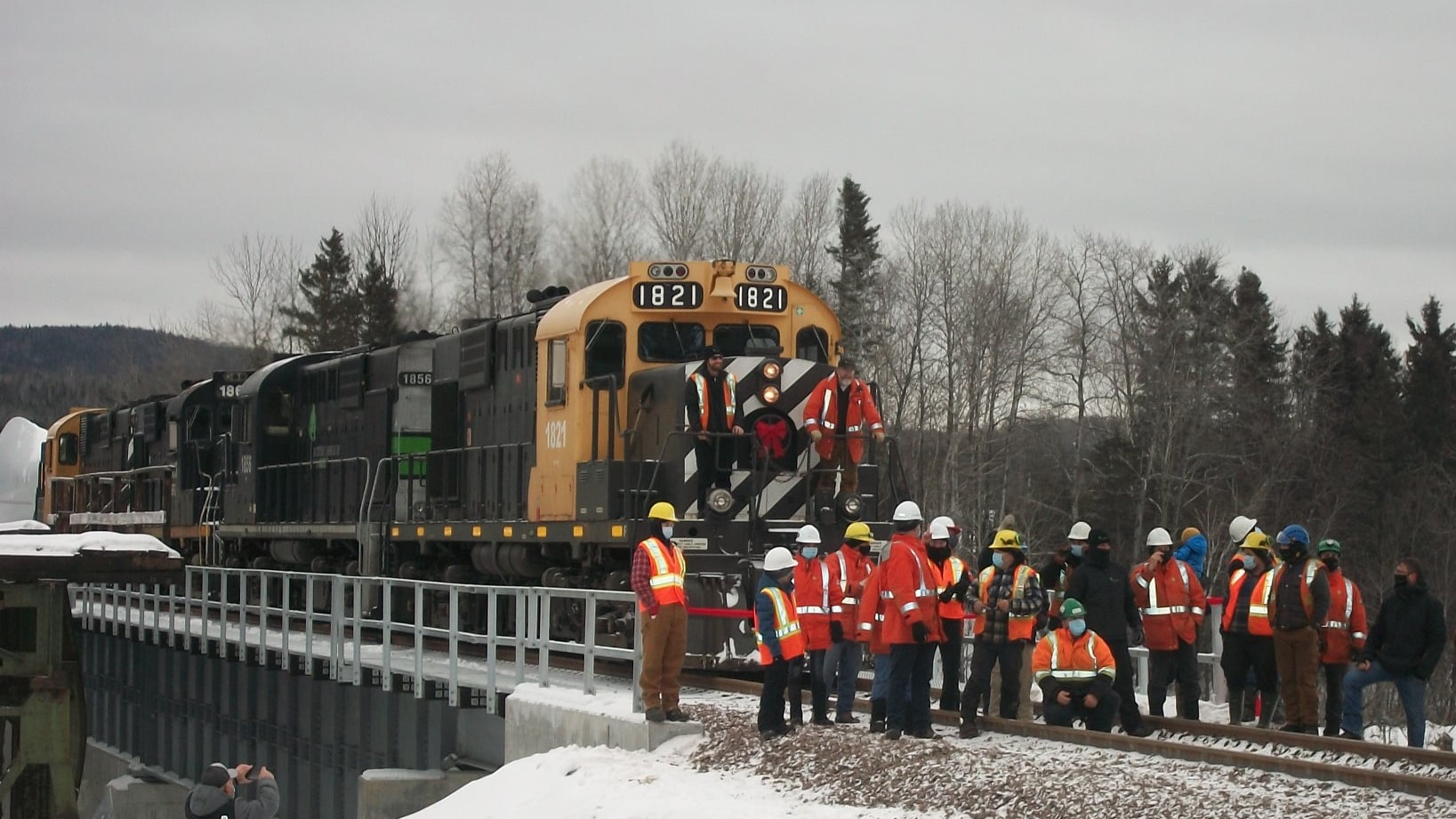 The rail mode for freight is making gains in Québec. The Chemin de Fer de la Gaspésie is seeing work going on simultaneously on three bridges, with one already in place before the start of December. Following flood damage to the two existing railroad bridges over the Cascapédia River in Cascapédia-Saint-Jules, originally built in the 1890s, construction crews worked tirelessly around the clock to finish the new bridges several months ahead of schedule, opening the bridges and reopening the line to Caplan on Christmas Eve. Coupled with ongoing renewal of track, this means heavier loads can be carried from such important shippers as Ciment McGinnies, lumber mills, and turbine blades from LM Wind Power. The CFG has built a new transfer yard for wind turbine blades at Carleton, to keep this business on the rails.

Residents of the region have been campaigning for the restoration of passenger services, and in its latest corporate plan, published this fall, VIA Rail has now indicated it will restore the passenger train service to Gaspe when the track and bridge work is completed through to Gaspé, which is expected before 2025.

Much of the Québec Central (ex-CPR) network, owned by the Province, is now operated by the shortline Le Chemin de Fer de Sartigan, which has growing traffic, according to the magazine RAIL QUÉBEC.  Grain traffic has risen from 900 carloads in 2019 to 3,000 in 2020. Other traffic includes structural steel and plastic. Reopening the line to Vallée-Jonction has been  made possible by the construction of a new bridge, giving access to new wood traffic.

The Canadian Pacific Railway for its part has reinvigorated the line to Maine and New Brunswick, following its acquisition of the Central Maine and Quebec Railway in May 2020. Services for container traffic to and from the Port of Saint John were started in August, running right through to Central Canada. Work is also underway to upgrade the track on the route, which was previously divested by Canadian Pacific in 1995.

CN and the Port of Québec also have plans for a rail-served addition to the port downstream of the present docks. This would give the railway renewed container traffic form this source, although the environmental assessment has turned in a negative report because of the impact on endangered species and the loss of a beach among other problems.

A more positive report was turned in on new container ship berthing facilities at Contrecoeur, downstream and across the St-Lawrence from the existing Port of Montreal.  This rail-served facility would generate significant traffic for CN, and construction is expected to start in 2021.