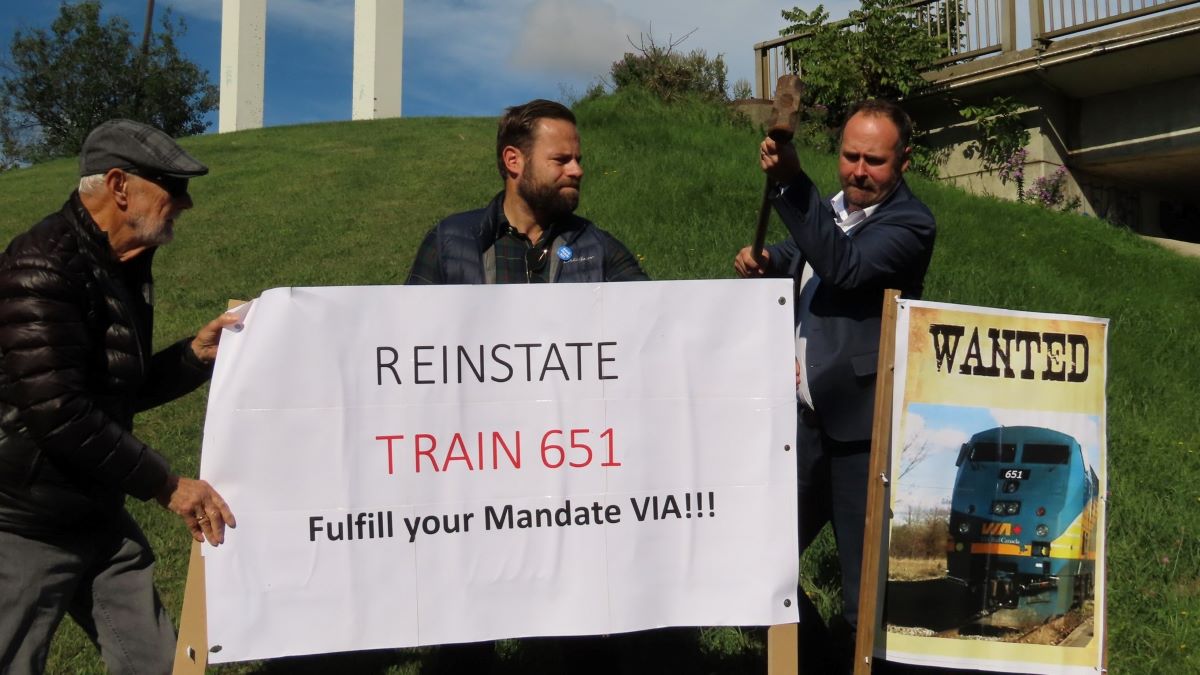 Cobourg commuters campaigning for the reinstatement of VIA Train 651, the early morning service from Kingston to Toronto that serves all stops along the lakeshore route, and its evening return service, held a rally at their station on September 24th, 2022.

David Piccini, the local Member of Provincial Parliament who has been closely involved with this campaign, spoke about the need for Train 651 to be reinstated, as did Philip Lawrence, the federal Member of Parliament for Northumberland—Peterborough South.

The mayor of Quinte West, Jim Harrison and a number of other local dignitaries made their own presentations, with local residents speaking about their use of the train and desire for its return. Board member Paul Bennett spoke on behalf of Transport Action Ontario, and his report of the event is attached below.

Northumberland County also released a report titled Getting your Commute Back on Track: The Case for the Return of VIA Rail Canada Commuter Train Service on September 8th, based on a survey of residents in this region between July 7 and August 5, 2022 that received more than 2800 responses. The report anticipates ridership for Train 651 would be strong, potentially greater than pre-pandemic levels and, if train service is not returned, that residents will be hard hit, with increased barriers to accessing job opportunities, education and retraining, and medical appointments.

Transport Action has been calling for the return of this train since the fall of 2021, and although we are cognisant of the challenges that our national passenger railway continues to face in term of funding, fleet availability and crew recruitment, we continue to press VIA Rail to reinstate the service before commuters have to face another winter of dodgy driving conditions on highway 401.