Gaspé railway expects to reopen to Port-Daniel-Gascons in 2023 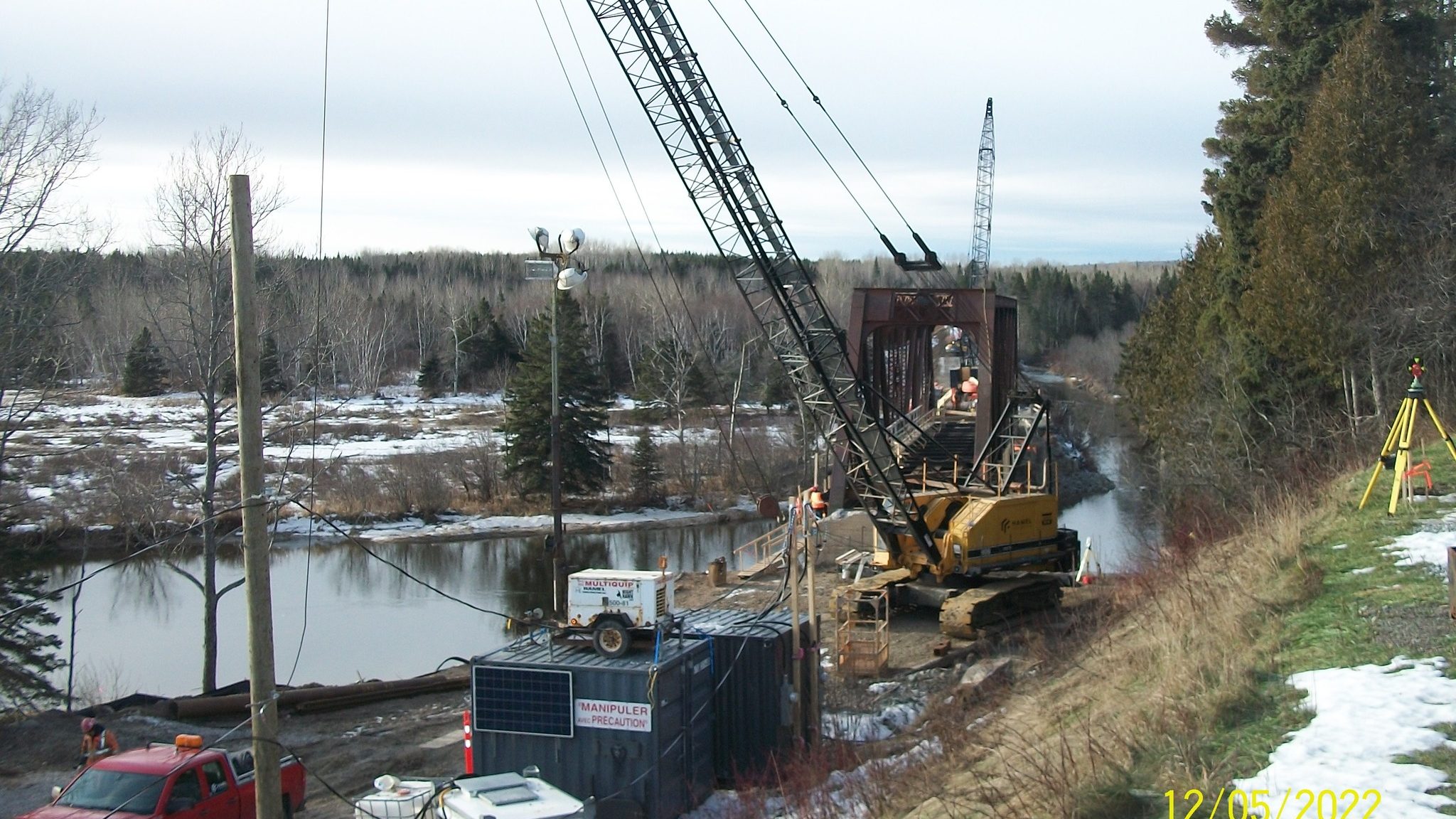 2023 is expected to be a good year for the Gaspé railway, with reopening as far as Port-Daniel-Gascons possible by the end of the year, together with the line being ready for the return of passenger service at least as far as New Carlisle.

This funding will allow the SFCG carry out a lot of the smaller maintenance jobs between Caplan and Port-Daniel-Gascons. They will replace ties, spread ballast, replace culverts, repair public crossings, build retaining walls, and repair smaller railway bridges, while work proceeds on the larger projects such as bridge replacements.

The MTQ launched numerous calls for tenders in 2022, and all the major contracts to repair infrastructure between Caplan and Port-Daniel-Gascons have now been awarded, with many projects making good progress. Thousands of ties have been replaced and thousands of tons of ballast have been spread. Track surfacing work, leveling and straightening the rails has also been done.

Work on the Ruisseau-Leblanc bridge (Mile 82.20 Cascapedia Subdivision) started in the summer of 2022. The old bridge was dismantled, and construction of a new railway bridge is now well underway. The abutments are ready, work has begun on the piers, and this new bridge should be in place by April or May 2023.

The Ruisselet bridge in Caplan (Mile 80.90 Cascapedia Subdivision) has been completely replaced, and work on the Bonaventure River railway bridge (Mile 90.10 Cascapedia Subdivision) started in the fall of 2022. This bridge doesn’t need to be replaced, but the major repairs required are now well underway, with two cement piers in the river finished. Work should be completed by the summer of 2023.

The contract to repair the Shigawake trestle (Mile 13.00 Chandler Subdivision) was awarded in the Summer of 2022. An access road to the bridge has been built, and work is expected to commence in January 2023.

The contract to move the railway east of the Port-Daniel-Gascons cement plant (between Mile 25.40 and Mile 26.10 Chandler Subdivision) eight meters northwards, because of erosion, and build a rail yard for the cement plant, was also awarded in the fall of 2022. The project is starting this winter and expected be completed by July 2023.

By the end of 2023 or early 2024, SFCG freight trains should be able to serve the Port-Daniel-Gascons cement plant directly rather than having to transload at Caplan. Meanwhile, wind turbine blades manufactured in the region have begun shipping by sea, and that traffic would need to be won back, if possible, once the line reopens.

The third segment of the line between Port-Daniel-Gascons and Gapsé will be challenging to rehabilitate. Although track maintenance work was also carried out on some sections of the railway, other sections of track must be moved from the coast. Decreasing sea ice due to climate change leaves the coastline with less protection from winter storms, including the storm of December 22 and 23, 2022.

Sections of the railway along the coast, in the vicinity of Bourg de Pabos, Chandler and Haldimand, in Gaspé, were particularly affected. Strong storm winds combined with high tides caused coastal erosion, which was responsible for the damage. The open section of the line from Matapédia to Caplan and the section currently under rehabilitation between Caplan and Port-Daniel-Gascons were spared.

According to the president of the Société du chemin de fer de la Gaspésie, Éric Dubé, it is not surprising that damage occurred at these locations since no protection work has been carried out in eastern Gaspésie for more than ten years. The company expects budget evaluations for rehabilitation work on this section to arrive by next spring, with MTQ committed to reactivating the entire route.

A dozen companies have responded to the MTQ’s call for expressions of interest, launched in November, to undertake work on the railway between Port-Daniel-Gascons and Gaspe. The MTQ is currently developing its strategy for carrying out the work, with a view to putting the entire railway between Matapédia and Gaspé back into service as soon as possible. If all goes, well major work between Port-Daniel-Gascons and Gaspé could start in the fall of 2023.

According to the MTQ, the Caplan to Port-Daniel-Gascons section of the line will be reopened in 2024. However, the rail line could be ready by fall 2023 as far as New Carlisle. The Coalition des Gaspésiens pour le retour du train will push hard with local elected officials and federal politicians for the return of VIA Rail passenger service between Matapedia and New Carlisle, as a first step, after more than 9 years of absence.

Find out how to get involved at: https://www.gaspetrain.org/je-fais-une-action-pour-le-train/

VIA Rail has stated several times they will resume service, but that they wish to wait until the whole line is repaired so they can go all the way to Gaspe. With VIA Rail’s long-distance fleet in crisis due to the advanced age of the equipment, it will be a challenge to get this service restored and so it is vital to keep up the pressure both for rapid reinstatement of train service as far as New Carlisle, and for investment in new long-distance trains to secure the long-term future of services to Gaspé and Halifax.

Meanwhile, the RÉGÎM bus shuttle service between Gaspé and VIA Rail’s Ocean at Campbellton continues to operate in the summer season, and for the Christmas holidays.