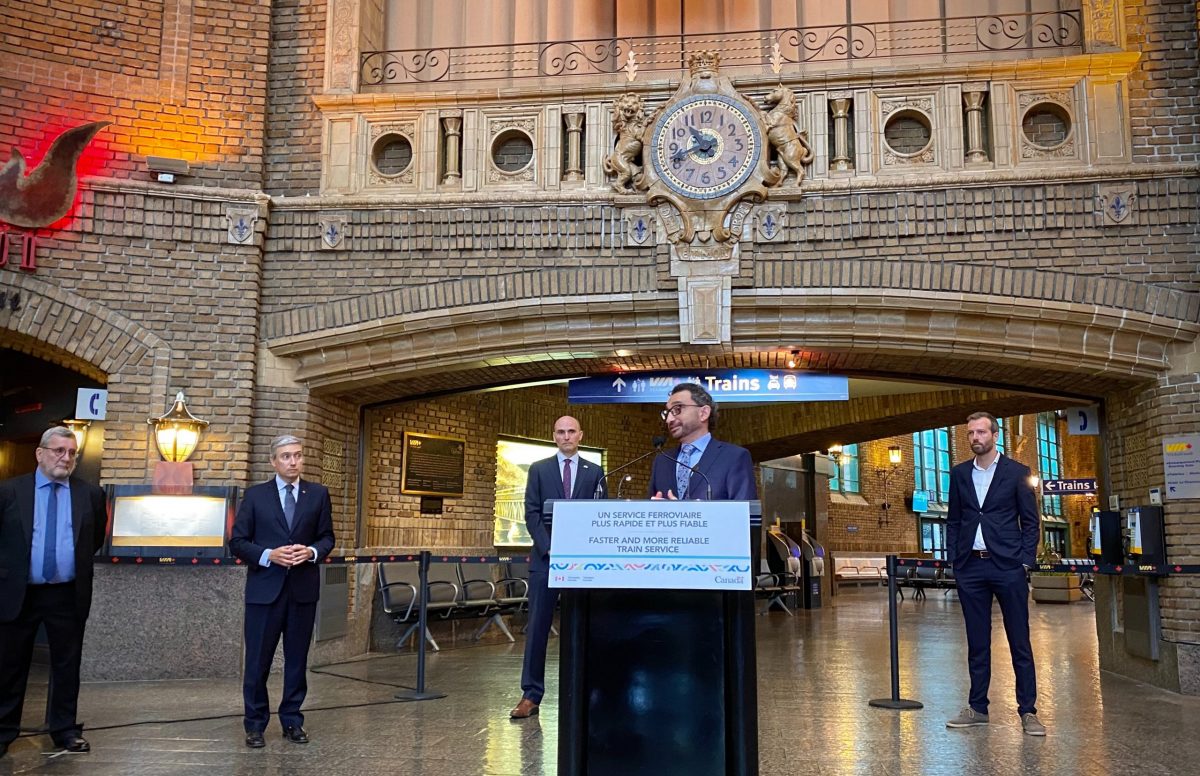 With the High Frequency Rail Project now envisaged to include electrified passenger trains, access to the Gare du Palais in Québec City is one of the design challenges ahead. The history of passenger rail service to Québec City suggests that finding a solution will be worthwhile.

Québec City was late in getting a railway, despite its strategic position and commercial importance. Finally in 1872 the first Gare du Palais was constructed where the current edition is situated, to serve the line to Ottawa along the North Shore of the Saint Lawrence River and the Ottawa River. The Canadian Pacific Railway bought the line in 1882 and built the current station in 1915-1916. Other railways then moved in, and the station served lines in all directions for several decades.

The access to the station for most of these lines was over the Canadian Pacific Railway’s east-west line below the hill on which sits the upper town and the Plains of Abraham, but this came to an end after repeated demonstrations against its presence among the houses and businesses of the lower town, led by St-Roch’s populist parish priest. When the Dufferin Autoroute was built through the area, the station was expropriated and the tracks leading to it were lifted in 1976. The Canadian Pacific Railway retreated to an inconvenient new site on Avenue Saint-Sacrement, and Canadian National built a suburban station even farther away, in Sainte-Foy, near the Québec Bridge.

The latter station became the VIA Rail station in 1979. Meanwhile, the Mayor of Québec, Jean Pelletier was dissatisfied with this exile of railway services to the fringes of town. Once funding had been arranged, $28 million for the station alone coming mostly from the federal government, in 1985 the Gare du Palais was reopened to what rail passenger services had survived the cuts of 1981. A circuitous but effective route to the station was established, which comes around the plateau on which the upper town is located and reaches the station with the last few hundred metres coming into the new trainshed from the northeast.

While the station was expected to be intermodal, serving motor coach services as well as trains, it took some time to persuade the intercity bus operators to move into their part of the station. The total cost of all these changes, over a decade, was about $600 million according to Mr. Pelletier.

The winds of change are blowing again over Québec City and its railways. VIA Rail Canada has conceived a plan to get its main “corridor” trains off the freight-encumbered CN lines onto lines with less or even no current traffic, belonging now or in the past to Canadian Pacific, through Trois-Rivières, Ottawa and Peterborough to Toronto.

Much of the current circuitous route from the Québec Bridge to the Gare du Palais would be avoided, with the ex-CP line that is likely to be used for High Frequency Rail would be connected at Allenby Junction, making for a fairly direct route to and from Gare du Palais.  However, this route is shared with freight trains to and from the Port of Québec and one of the objectives of High Frequency Rail is ensuring that freight dispatching does not delay passenger trains. The freight railway also remain reluctant to contemplate electrification.

In Québec City, the fact that the proposed tramway would be routed through the Saint-Roch area, some blocks away from the Gare du Palais may lead some to assume that the station could be abandoned, and a new station built for a direct connection to the tramway. Such an assumption would ignore a few key facts:

Further, the tramway is unlikely to attract as many railway passengers as the numerous taxis and private ride services, if observation of the behaviour of people detraining at Sainte-Foy and Gare du Palais is any indication.

Gare du Palais is a convenient, well-connected, and prestigious anchor for the eastern terminus of existing train services and future High Frequency Rail in the Québec-Ontario corridor. Investments have made it into a solid base for growth, and money should now be invested in the lines serving Québec City, not wasted on yet another facility in a probably less central and less visible location.

More details of the history the the Gare du Palais: http://www.trainweb.org/oldtimetrains/stations/CPR_qc_palais.htm