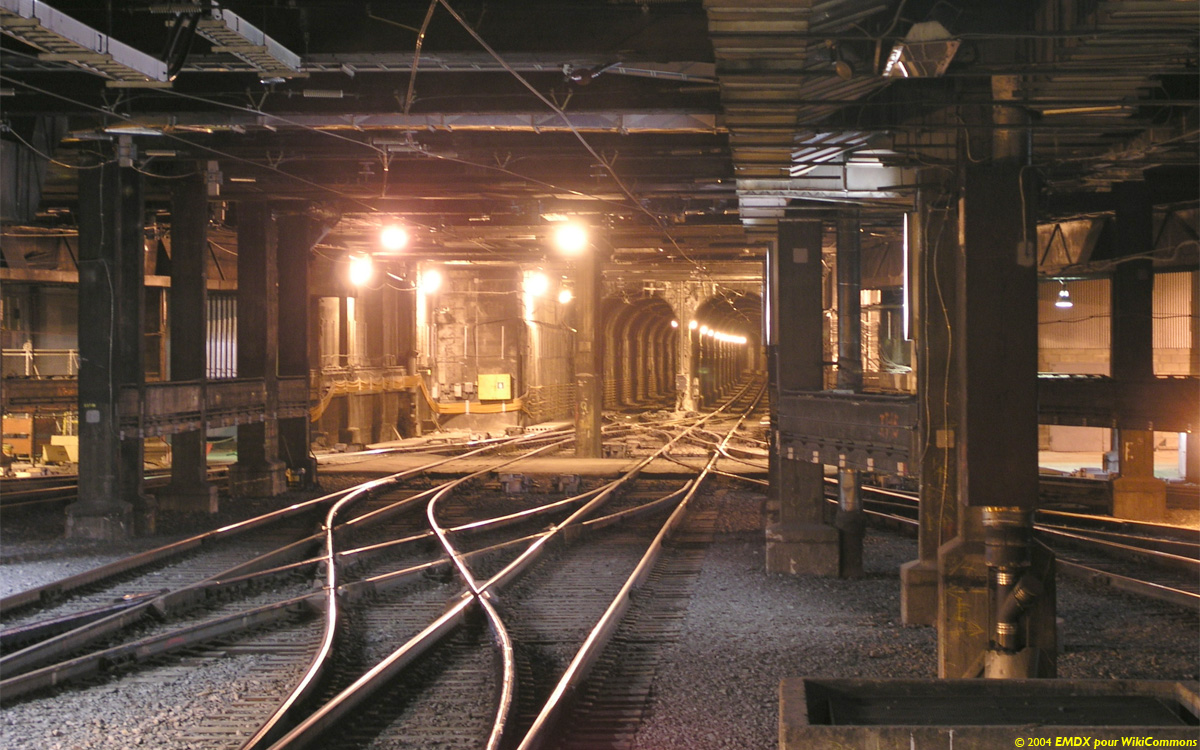 The Quebecois phrase sac de noeuds, which literally translates to “bag of knots” accurately describes the complex problem that now confronts the High Frequency Rail project in Montreal. Interoperability with the automated Réseau Express Metropolitan (REM) through the Mount Royal Tunnel will not be possible, despite earlier assurances.

While the federal government has announced its intention to proceed with HFR, it is still limiting the amount of detailed information made available to the public, despite Transport Action’s calls for transparency and requests for answers to key questions. Untangling the route through Montreal has been one of those questions for several years, and multiple possible routes into downtown Montreal have been advanced and discussed by passenger rail advocates.

This article summarizes some of the possible route options between Dorval station and L’Épiphanie, on the Quebec-Gatineau Railway Trois-Rivieres Subdivision, with potential advantages and drawbacks in each case. Some speed restrictions for tight curves are inevitable, and these are marked on the maps below.

The good news is that a no-build option to reach the North Shore route is still possible, which could be an acceptable way to reinstate passenger rail service to Trois-Rivieres before 2025, together with several options that require comparatively small amount of new construction. Other options would require building new connections or, more ambitiously, a new tunnel for a longer-term and less circuitous solution.

Please note: All of the routes shown below are speculative, and do not represent proposals by Transport Canada or VIA Rail. Potential property impacts are marked in some cases, and these would be subject the the federal government’s Impact Assessment process. We welcome feedback on these options as well as alternative proposals.

Although the announcement by Minister Omar Alghabra on March 9th formalized what many had long suspected, apparently ruling out the use of the Mount Royal Tunnel, two options for using the tunnel were possibilities if the choice to ensure interoperability had been made. These should be considered the base cases against which the costs of workarounds for not being able to use the tunnel are evaluated.

Using the connection from the Exo Deux-Montagnes line to the CN St-Laurent Subdivision, this could have been a no-build option for the implementation of HFR, either using the Exo alignment between Repentigny and Mascouche opened in 2014, or avoiding that detour by constructing a new connection to join the Trois-Rivieres Subdivision at L’Épiphanie.

One detail that has consistently appeared on conceptual maps issued by VIA Rail is the possibility of a station in Laval. Such a station would greatly increase the catchment area for intercity passenger rail, and would probably be an upgrade of the La Concorde station, which offers a connection with Metro Orange Line. This route was not intact, so a connection between the CN St-Laurent Subdivision and CP Parc Subdivision would have to be reinstated. Unfortunately, a Home Depot has since been built on the former track bed at the location of the connection, so compensation for relocating it would be required.

The most obvious way to avoid the Mount Royal Tunnel is by taking the “around the mountain” route, which has been used by VIA’s northern Quebec trains since the retirement of the boxcab electric helper locomotives in 1995. Trains would have to double back from Gare Central nearly all the way to Dorval before making the turn towards Quebec City, adding 15-20 minutes to the journey. This will make it harder to achieve the government’s target of cutting 30 minutes from Montreal to Quebec City travel times, and harder still to achieve a competitive two-hour travel time.

These options are in keeping with the original vision of HFR to maximize benefit at modest cost, given the practical constraints.

Like the option of reaching Repentigny via the Mount Royal Tunnel, this is a potential no-build route, with the option of constructing a more direct connection to Trois-Rivieres Subdivision at L’Épiphanie later.

This option switches from, CN to CP trackage in order to reach Laval, once again requiring the reconstruction of a connection on the site current occupied by Home Depot. It might also be possible to reach the CP route by building a connection from the northern end of CN’s Turcot Yard, but this route would be longer and probably more expensive than compensating the commercial property impacted.

The routes above both pass through CN’s Turcot Yard, which is accepted for the three times weekly northern Quebec trains but likely to be unacceptable for a frequent service, requiring new infrastructure to eliminate conflicts with yard operations. Using the CP Adirondack Subdivision to bypass the yard could avoid this, but it is not currently possible to reach this alignment from the CN tracks towards Gare Central nor would it be feasible to construct such a connection.

Therefore, HFR trains would have to use the Lucien L’Allier Station in Montreal in order to take advantage of a a no-build, all-CP route to Laval and the North Shore. The route to Dorval would be considerably shorter and straighter, reducing travel times towards Toronto.

However, this option would also separate VIA Rail services across two sites, risking passenger confusion and making connections from the south shore route, the Ocean, and Amtrak services much less convenient. Following the closure of Windsor Station and the construction of the Bell Centre in 1993, the current Lucien L’Allier station offers only limited facilities and would not be suitable for intercity rail service without a significant upgrade.

The RFEOI document specifies that stations must be in the downtown core, so the federal government has ruled out the option of “cutting the Gordian knot” by completely bypassing downtown Montreal in favour of stations with REM and Metro connections in Dorval, Canora or Parc, and Laval, which would otherwise be a potential no-build route using CP trackage.

However, any of the “around the mountain” routes offer the possibility of routing at least some trains directly between Quebec City, Dorval, and Toronto. This could cut the fastest travel between the two provincial capitals to 6h30 or less, compared with the 9h50 fastest trip and 11 hour average today. The greatest benefit of this would two pairs of trains in the early morning for lunchtime arrivals and departing after 5pm for late evening arrivals. This would make a long weekend trip to either city by rail an attractive proposition, and reduce the number of overnight stays required for most trips. The express connection to Dorval would also be attractive to passengers connecting with intercontinental flights.

Boring a new tunnel would add to the project cost, to the tune of several billion dollars. This is the opportunity cost of the government’s failure to act swiftly on the opportunity of HFR when the proposal was first presented, and of not safeguarding the proposed route of HFR while reviewing the proposal, thus allowing the existing Mount Royal Tunnel infrastructure to be co-opted for exclusive use of the REM. (See our article High Frequency Rail has grown into a megaproject, can it succeed as one?)

Evaluating either of these options, or any other new tunnel, should be separated from the rapid implementation of HFR using one of the around the mountain route options. The high cost of a new tunnel should also be weighed against revisiting the engineering challenge of interfacing the REM’s automated systems and the Enhanced Train Control systems that Transport Canada wishes to introduce for intercity rail.

A new tunnel, 5.4 km long, would start immediately north of Gare Central, and emerge where the CP alignment turns toward Gare Parc. HFR services would use the CP alignment via Laval described above. The cost of such a new tunnel, assuming twin-bore construction similar to recent alpine rail tunnel projects, would be in the region of $1.8 billion.

The new tunnel could also allow Exo Saint-Jérôme services to access Gare Central, rather than taking the around the mountain route to Lucien-L’Allier, and to be interlined with the Mont-Saint-Hilaire route for operational efficiency and to optimize platform use. Before the REM project, Exo was considering rerouting Saint-Jérôme trains through the Mount Royal Tunnel to save at least 15 minutes of travel time to downtown. The tunnel portal approach at Gare Parc would need to be relatively steep, potentially following an abandoned alignment to minimize property impacts.

By far the most expensive solution, with a potential cost of at least $3bn, would be to construct a new set of platforms and tracks beneath Gare Central, parallel to or below the Bonaventure metro station, accessed from the west by a tunnel starting near the Turcot interchange, and emerging in Viauville to follow a mostly abandoned railway alignment along the eastern half of the Island of Montreal, before finally rejoining the existing route around Pointe-aux-Trembles. However, this also offers the shortest route, and new the platforms could be designed for much smoother passenger circulation, reducing station dwell time for through trains from the current 30 minutes to less than five minutes.

Depending on final design, the new platforms could also replace Lucien-L’Allier, bringing Montreal’s intercity rail, commuter and subway services into a significantly enhanced central hub, and allow a new Exo service to the eastern part of the city.

Photograph: The Mount Royal Tunnel’s southern portal, seen from Gare Central prior to construction of the REM, by Emdx via Wikimedia Commons