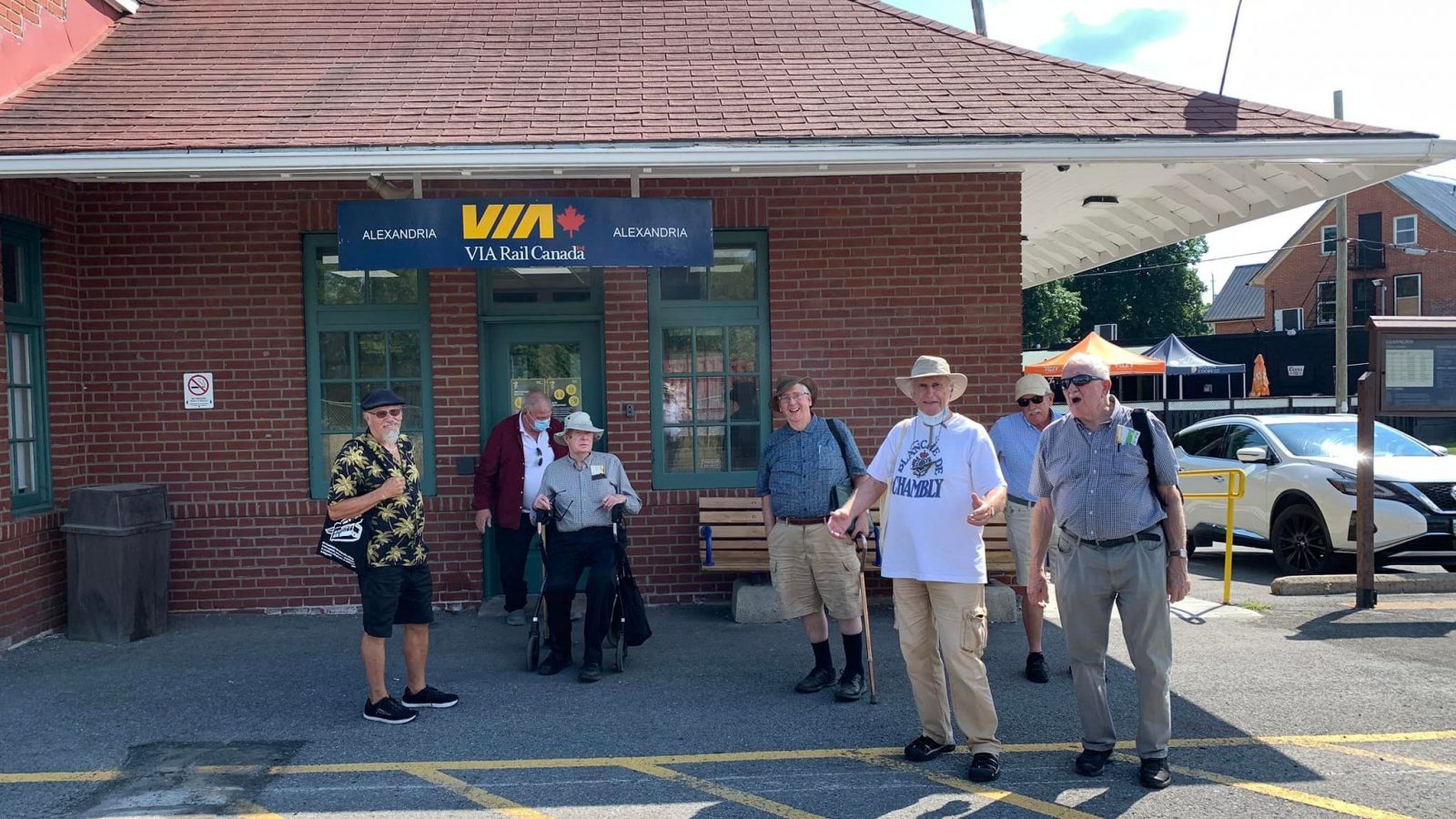 Eight members of the Ottawa Transport Action discussion group traveled on VIA Rail trains to Alexandria ON and return on August 19th, 2022.  The undersigned met up with the group at Alexandria, having travelled by VIA Rail from Saint-Hyacinthe QC, again on a return trip.

The objectives of the journey were familiarisation with the current offering of passenger transport in the Canadian corridor, gathering of information on passenger service features such as on-time performance, comfort, quality of service on board and in stations, including access to trains for the differently abled. Side benefits were building social links between members and reinforcing ties with Transport Action in a wider sense.

To begin with the Ottawa-based group, David Glastonbury reported that, using a walker and a cane for mobility purposes he and a friend joined the group at Ottawa Station to take train 26 to Alexandria. A tour of the station included the well-used and recently expanded Business Class lounge. The train was at a low platform on track 3, and not the accessible high platform on track 1. A sub-group of passengers, including David G. were led on the above-ground path to the platform by a VIA staffer. All except one person using a wheelchair boarded by climbing the steps of Car 3. The wheelchair user was assisted by station and on-board personnel to use the pre-booked portable lift.  At Alexandria, VIA staff provided a box step to the eleven people getting off to descend from the train steps to the (low) platform.  The station was well-kept and provisioned, and announcements allowed passengers to track the progress of trains.  The return train was 35 minutes late but passed another train without stopping at Limoges.  Exit at Ottawa was again on steps and an elevator to the tunnel below the tracks and another up to the concourse was provided with help from VIA personnel who were well turned out and helpful. The trains used, equipped with LRC coaches, were comfortable and fairly smooth-riding.

Seymour Kell, David Glastonbury’s travelling companion, reports that the Ottawa station building is fully accessible, but the path to the train used to get to track 3 was “a long walk” to reach the platform, uneven over the tracks and a long walk back to the train. VIA personnel offered a wheelchair for one passenger having some difficulty but provided the lift for only one (other) passenger. The steps up into the car are difficult for some, and the aisle was too narrow for David’s walker. At Alexandria, on-board personnel opened the exit door close to his seat and helped with alighting. No platform mobile lift is available there. The station itself is unstaffed but clean and the washroom is accessible.  The return train was late due to construction in Montréal. Once at Ottawa it took time to fetch David’s walker and he had to stand and wait. Again, use of the wheelchair lift was restricted, but the elevators were appreciated.

The undersigned’s train from Saint-Hyacinthe was also delayed by station work in Montréal, in both directions. There was no freight train interference to affect any of the trains that the Ottawa group or I used. Information from both Canadian and American sources indicates that CN has taken some note of intense criticism of its dispatching and passenger trains appear to benefit. Certainly, on the day all trains ran on timetabled trip times and line speeds.   The only cause of delay seemed to be unusually long station dwell times in Montréal.  The trips from and to Saint-Hyacinthe were smooth-running and comfortable, staff was professional and helpful, but there were less on-board staff than in the past, so the lady responsible for my car in both directions had to assist passengers, check tickets and serve snacks and drinks.

Research into ways to ease boarding from low platforms would be welcome. Locked-up platform lifts accessible to staff with a key to be offered at unstaffed stations, as observed at some other VIA stations and in California, should be provided.

The entry into service of the new corridor fleet, equipped with motorized lifts that extend from the train and wider aisles, will improve the situation. However, manual lifts will continue to be needed for trains formed with stainless steel equipment, which is expected to continue in service for several more years. It is important to ensure that a functioning lift is available where advertised, and stations that are not currently advertised as having a lift, which include Casselman and Ingersoll, should be equipped with one.

Boarding assistance to persons with mobility limitations using the platform portable lifts should be extended to a wider group than the wheelchair users. Assistance for those travelling with young children and others with difficulties should be more complete.  Porters used to be offered in major stations and their presence in Ottawa would make what was a clean, comfortable trip – while on the move – equally agreeable in such a major station.

Finally, VIA needs to get the station dwell time in Montréal down to the advertised time, as our admittedly limited experience on August 19th seemed to indicate that this is a major hindrance acting against on-time performance.