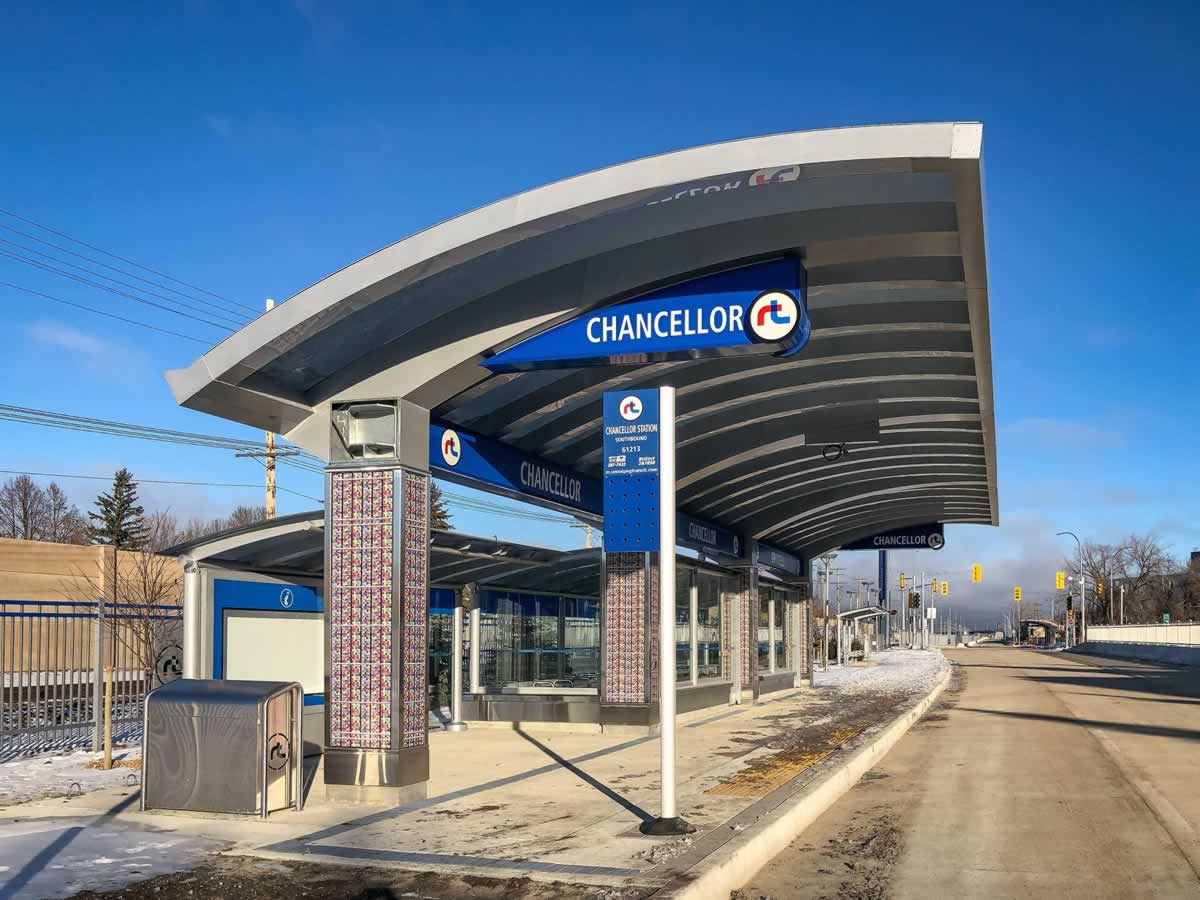 Phase 2 of Winnipeg’s Southwest Transitway is largely complete, and is scheduled to open in April 2020, following testing and driver training.

The Southwest Transitway is the first of several proposed Bus Rapid Transit (BRT) corridors in the city. The transitway has been constructed in two separate phases, and is envisioned to run from downtown Winnipeg southwest to the University of Manitoba.

The contract for phase 1 was issued in 2008, and it commenced operation on April 8, 2012 with service between the downtown area and Jubilee Station at the south end of Fort Rouge. A dedicated transitway was built for most of this distance, with a tunnel under the CN Fort Rouge rail yard. Buses travel at up to 80 km/h and stop at five stations: Balmoral, downtown next to the University of Winnipeg; Harkness, the entry/exit of the dedicated transitway; Osborne, a fully enclosed station over Osborne Street; Fort Rouge; and Jubilee at the south end of Fort Rouge.

The route for phase 2 was always going to be between Jubilee and the University of Manitoba on the Pembina Highway, but there was significant controversy over the exact route through the Parker Lands just south of Jubilee, with groups rallying to oppose development in the Parker wetlands.

The contract for phase 2 construction was issued in June 2016, and the transitway is complete as of the end of 2019, with stations built and testing commencing. Significant construction was required at Portage Junction at the south end of Fort Rouge, where the transitway passes under the CN junction, requiring one CN bridge to be replaced and two new bridges to be installed.

The first phase of the transitway has served an a express corridor for several bus services from the southwest of the city to reach downtown.

With phase 2 complete, Winnipeg Transit proposes that the BRT network will operate as a spine and feeder network, with very frequent service along the Transitway “spine” and feeder buses interchanging at the various BRT stations. This means that a transfer will be required for anyone not living near the BRT stations.

The “spine” will be called the Blue Line and will have 28 new articulated buses, holding up to 25% more passengers than existing buses, and operating every 3-4 minutes as peak times.

Each BRT station has a heated, enclosed area as well as outdoor bench seating, a dedicated smoking area, and secure bicycle storage lockers.

As part of the Transitway construction, pathways were built parallel to the Transitway for bicycles, scooters and pedestrians. These integrate where possible with existing bike paths to allow cyclists to use the corridor and the BRT.

A study was started for the Eastern Corridor in early 2017, with phase 3 of public consultation scheduled for early 2020.